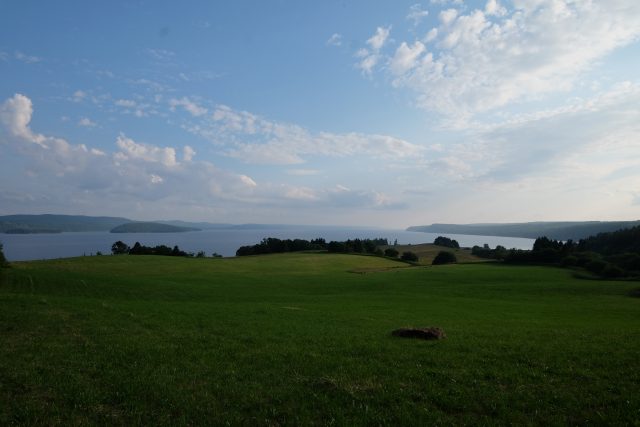 In November 1972 my husband Bart Weller and I flew our V-tail Beechcraft Bonanza from Danbury, Connecticut to Sydney, Cape Breton Island, Nova Scotia, Atlantic Canada. Needless to say that late November, American Thanksgiving, is hardly the ideal time to visit one of the most beautiful and rugged islands of North America… Sydney had a controlled airport at that time and we obtained customs clearance, rented a car and checked into a hotel. Everything looked dismal… the next morning we embarked on our journey of discovery heading towards the English Town Ferry, on to Ingonish and left the Cabot Trail towards Bay St. Lawrence. At Capstick two slaughtered hogs were hung outside one of the farm houses – I felt I had come “home” to Ingmar Bergman’s “Virgin Spring”….. At Meat Cove we reached the end of the road – the ocean vistas were extraordinary.

It was a time when the Canadian Dollar had a higher value than the US Dollar and foreigners were allowed to invest in Canadian real estate, hence a perfect moment to try and find a nice piece of land in Atlantic Canada. An added advantage was that the four hour flight from Danbury, CT to Sydney, NS did not require refuelling our plane.

On our next trip to Cape Breton we met the caretaker of the Alexander Graham Bell Museum in Baddeck who connected us with Alex McRae of Boularderie Island. Alex McRae was passionate about harness racing for which he raised horses. He had also just begun selling off land of which he owned hundreds of acres. We were able to acquire 25 price acres of farm land on the South shore of the Bras d’Or Lake. This land came with a gutted wooden hut used to store turnips. We found out that once upon a time this hut had been a four bedroom house in which the mother of actress Shirley McLaine was born. The McLaines had arrived from Scotland in the eighteen hundreds and a large rock near the shore bears testimony of the various entities landing in Cape Breton Island.

In the ensuing years we made this hut a bit more comfortable,  installing a gravity fed water system, a very simple “bathroom” with a gas fired toilet, a camper stove on which I cooked many meals and baked many pies. I fetched water in a 25 gallon milk can from the McRae barn, which were pumped into a 30 gallon water tank. We finally did install electricity and during those early years I knew how every drop of water was used.

Each spring we returned for a few days to check whether our cabin had survived the previous winter, made improvements and sometime each September, we boarded the little hut up for the coming winter. I have the fondest of memories of the weeks spend on Boularderie Island during summer months, picking strawberries, blueberries, raspberries, chanterelle mushrooms plentiful in our immediate surroundings, loving the simple joys of Cape Breton, reminiscent of the summers I had enjoyed with my grandparents in Bavaria during post WWII years.

In 1988 my husband divested himself of his company VITRAMON Inc., headquartered in Monroe, Connecticut with its subsidiaries on several continents  and with this newfound freedom we decided to build a more comfortable house, one which could welcome our many friends not quite as willing to “rough it” as much as we had been.

We found a talented local architect, Ron LeLievre, and during many late night sessions we discussed our anticipated use of this new vacation home. During the four decades of VITRAMON, Bart hardly every thought of the idea of taking a vacation and the trips we took were always connected to business. So here was a new challenge for both of us. Once Ron created a three-dimensional model of  the house, the project was ready to be launched, and a builder had to be located.

While searching for a company able to execute the unique free standing staircase, we were connected to Tedd Benson in Keene, New Hampshire. However, Tedd’s company BENSONWOOD did not specialise in staircases and connected us with Henry Bond in  South Carolina, creator of “one of a kind” staircases.

Then an event occurred which turned my life upside down. On Thursday 24th May 1990 we landed at Sydney airport and settled into our cottage, ready to inspect progress on the construction. Friday, 25h May, was a busy day on the site with lots of construction people scurrying about. The foundation had been completed and my husband was anxious to document the progress.  I had suggested that he would have the best view from upstairs inside the existing barn, by climbing up the ladder.

My neighbour’s daughter Margret returning from school at 3 pm, walked over to the barn with me, holding my hand. We observed my husband standing with his video camera on top of the ladder and instead of positioning himself on the upper level, he made a peculiar motion with his right arm and fell straight down on the concrete floor behind the tractor. During this moment time stood still. While the construction crew called an ambulance I attended to my husband, who was profusely bleeding from the head and his breath was heaving heavily. It must have taken about 20 minutes before the ambulance arrived and took my husband to the Baddeck hospital. From there he was transferred to a Sydney hospital where the only neurosurgeon was on duty.

Our architect took me in his car to the hospital where the surgeon informed me that Bart had fractured his skull and at 8 pm he died without ever regaining consciousness.

To the shock and surprise to everyone at the hospital that night I declared that I was determined to complete this construction project. The news of this tragedy reached  BENSONWOOD in New Hampshire where the trucks had been loaded with the pre-cut timbers for our new home on this very day for departure to Cape Breton. When Benson learnt of Bart’s death, they decided to carve “Bart’s View” into the ridge beam on the upper level of the house.

A very intense year followed during which I made regular trips between the USA and Cape Breton and finally on 21 August 1991 ARKANDOR – the name I had given to the structure – was inaugurated, celebrating my late husband’s extraordinary life and by honouring all the crafts people who made this large 6500 square food timber frame structure a reality. My vision for this building was to make it into a local community centre, not just a huge home of an American industrialist, a place where artists, scientists, thinkers and healers could gather and share their knowledge and wisdom for the benefit of all humanity.

During the period of 1991 until 2011 when this unique building with perfect acoustics changed owners, ARKANDOR and its many visitors experienced countless magical moments.  Best remembered are the Annual Classical Music Festival under the artistic leadership of Russian violinist Albert Markov. Together with his wife Marina, formerly principal violinist of the Bolschoi Orchestra,  their virtuoso violinist son Alex Markov,  St. Petersberg cellist Mr. Ginovker as well as several pianists taught each summer violin, viola, cello and piano during 6 weeks each summer. Students, many of them winners of international competitions,  followed their teachers from New York City to Cape Breton and performed every Saturday evening a concert open to our local public. Our students  came from big cities in Asia, Europe and South America,  following their teachers to remote Cape Breton Island for a completely different learning experience.  Many experienced  nature for the first time, mesmerised by eagles, foxes, coyotes, possums and deer in their natural habitat. Our audience were Cape Bretoners, many of whom with Scottish and Irish backgrounds, were used to fiddle music. Cape Breton boosts  a huge reservoir of talented musicians, but the audience marvelled at what else  a violin could do. We were able to even arrange for some private lessons by our faculty to local talented fiddle players – a true “cross pollination” was happening with lasting effects.

ARKANDOR opened its doors to hosting weddings, where breathtaking views provided endless opportunities for pictures, capturing unique moments of great beauty. Cooking classes and a variety of workshops provided wonderful opportunities to use this amazing building.

While the countless memories created during these years linger on, we created a new building on the site of the original cottage in which the mother of actress Shirley MacLaine was born. As magical and timeless as ever are the views of the Bras d’Or lake and visitors, mostly close friends, continue to enjoy the setting, the honey produced by our bees, thanks to our wonderful caretaker Wayne whose energy is ever valiant and ever present.

In 2000 I discovered another magical place with the  real name given centuries ago by its occupants : “Fonte Magia”, which translates into “Magic Spring”, in Umbria, the green heart of Italy. Having been painstakingly restored and revitalised over the past 15 years, Fonte Magia, just like ARKANDOR , brings relaxation, peace, regeneration and joy to our visitors. While the Atlantic Ocean lies between both locations, they share one vision.

Come and be part of the magic !

Want to join the discussion?
Feel free to contribute!